January 27, 2010
I use an Apple Magic Mouse and really do love it. I use Adobe InDesign CS4 for writing technical documents. I also have a ring finger. Each of these things works well by itself. Together, they don't work well. This is a typical systems engineering problem. Each part works as designed, but together they don't work well.
Now you are probably wondering why these three things don't work together - millions of people use mice, thousands of writers use InDesign, and almost all of the people on Earth have ring fingers. Let me explain.

OK, so now you should be able to recognize the problem. My ring finger is interpreted by the Magic Mouse to do a horizontal scroll and InDesign extends the scrolling area by 60%, most of which is area I rarely use. In other words, while I'm working away, I get suddenly scrolled off into the blank area of the pasteboard. Since the document is in the middle, I have to scroll back to the center, which is harder to do than scrolling full left or full right.
The solution I've found is to put a small bit of painter's tape over the area where my ring finger rests. I could have used duct tape, and that would make a good joke, but I prefer the painters tape for now. 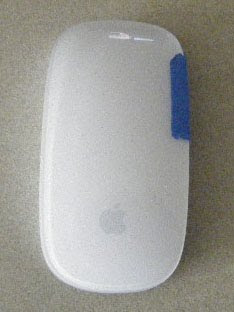 So far this is working well. A programmatic way to build dead spots on the Magic Mouse would be a useful feature. InDesign could allow me to control the horizontal size of the pasteboard. All of these programming changes are perhaps not difficult, but will also not be solved soon. For now I can be highly productive without having to horizontally scroll back to center on InDesign.
Now, about those deadlines...
systems engineering