January 12, 2010
I was doing the holiday cleaning recently and came across a blast from the past. Long ago, when I worked for NASA at the Kennedy Space Center, we were doing some work with an Apple Lisa and an Apple ///. Naturally, when the Macintosh first appeared, it created quite a stir. Along with the rush of announcements and press was the creation of a new magazine, St. Mac. I dusted off a copy of the premier edition. Apparently the magazine didn't last long, only 7 issues, but it brought back a lot of memories. My, how computing has changed since then... why kids today can't even remember when pixels weren't square and how the Mac saved mankind from a world of ellipses.
The cover shows the second generation Lisa. You can tell because the first generation used twiggy drives and the second used the new removable storage rage, 3.5" floppy disks. 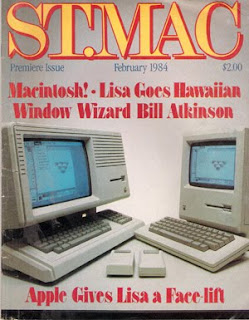 The table of contents includes a picture of a young Bill Atkinson. Bill made square pixels cool. 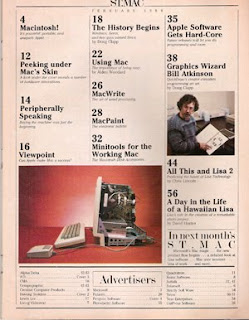